Cancer Cause and Cure by Percy Weston 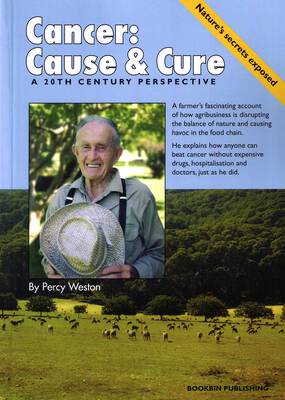 Cancer Cause and Cure by Percy Weston

Cancer: Cause and Cure by Percy Weston

Percy Weston, now 100 yrs, recounts his experiences and observations over a lifetime of struggle on the land and draws the reader into an intriguing detective story that spans the years of transition from the traditional methods of farming to modern ones. Informed by an expert knowledge of chemistry, he believes there is a causative factor for cancer via the food chain which science has totally overlooked.

He proved it first in animals in the 1940’s and then in humans by curing medically diagnosed cases of cancer and arthritis which he realised had the same origin.

Theres were miracle cures as far as doctors were concerned. How did he do it? Here is the enthralling story of one man’s unique journey of discovery.

Percy Weston has been a farmer for much of the past century in the beautiful Ovens Valley of south-eastern Australia where his grand-parents settled during the gold rush. The family homestead, Riltrin, which he built himself, has views of Mount Buffalo and the Victorian alps. It has its own spring-water supply and is surrounded by a vegetable garden, green orchards, nut grove, and paddocks of grazing sheep. At one time he grew tobacco in the valley. A scholarship he won as a boy gave him a grounding in the sciences. He would have gone onto a medical career had his father not suffered hardship at the hands of daring cattle thieves. On the farm he found himself having to study nature closely and follow the practices of his pioneering mother in order to keep his crops, livestock and family healthy. This haven of horticulture was to be his living laboratory.