The Miracle of Milk: How to use the Milk Diet scientifically at home by Bernarr Macfadden 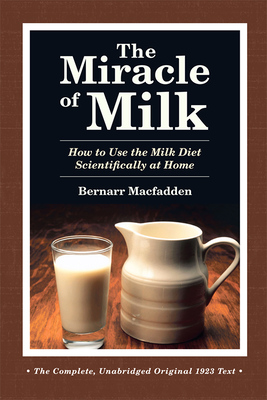 The Miracle of Milk: How to use the Milk Diet scientifically at home by Bernarr Macfadden

Touting the health benefits of milk and outlining the milk diet, The Miracle of Milk, originally published in 1923, starts dramatically with Bernarr Macfadden writing, “Milk is the greatest of all diet cures.” Macfadden, America’s first health guru, says that the milk diet will undoubtedly boost your vitality and may add many years to your life.

He states that when properly prepared for and properly used, the milk diet is capable of bringing about miraculous changes in the physical organism.

Macfadden’s health crusader commitment to exercise and a diet of fresh, nutritious food was spurred on by his start in life as a small, week child and the death of his parents to alcoholism and illness by the time he was 11 years old.

Overhearing a relative predict that he would not live to adulthood, he strengthened his constitution and went on to live a long and healthy life based largely on sound, holistic and natural approaches to health.

Macfadden frequently contradicted the popular beliefs of the time when little was known about nutrition and a high-caloric diet was the norm, and with today’s prospective his teachings about diet were amazingly accurate.

While the milk diet may not be practical for people to adopt fully, there are many health benefits that Macfadden outlines that readers can achieve just by increasing the amount of raw, whole, unpasteurized and non-homogenized milk in their diet.

This historic reprint contains many valuable nuggets that are just as profound and important today as they were almost a century ago when Macfadden traveled the nation advocating whole milk consumption.