The Cure for All Advanced Cancers by Hulda Regehr Clark 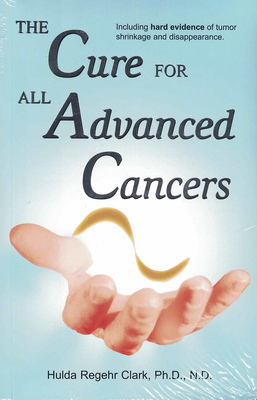 The Cure for All Advanced Cancers by Hulda Regehr Clark

The Cure For All Advanced Cancers By Dr. Hulda Regehr Clark, Ph.D., ND.

Dr. Clark states: "Cancer can now be cured, not only the early stages, but also advanced cancer, stages four and five. We are not accustomed to thinking about a cure. We think of remission as the only possibility. But this book is not about remission. It is about a cure. This may be possible because the true cause of cancer has been found."

"The cause of malignancy is explained in the earlier book, 'The Cure for All Cancers'. But removing the malignancy left behind the tumours as they were, prior to the malignant development. So eliminating tumours became the focus of additional research, and is the subject of this book. The 21 Day Program described in this book does both. Once you win this battle, even advanced cancer could be cured."

"The success rate for advanced cancer is about 95%. So you can count on this method, not merely hope it will work for you. It is a total approach that not only shrinks tumours, but also normalises your blood chemistry, lowers your cancer markers, and returns your health. The small failure rate (5%) is due to clinical emergencies that beset the advanced cancer sufferer. However, if you combine the advice in this book with access to hospital care, even 'hopeless' patients can gain the time necessary to become well again."

Hulda Regehr Clark is an independent research scientist. Dr. Clark has a Bachelor of Arts, Magna Cum Laude, and a Master of Arts, with High Honours from the University of Saskatchewan, Canada. Then she studied for two years at McGill University, before attending the University of Minnesota and obtaining her Doctorate degree in physiology in 1958. After doing government funded research for almost 10 years at Indiana University, she began private consulting in nutrition in 1979. She continued her studies to earn a Naturopathy Degree and an amateur radio license. The freedom to follow her most promising observations led to her breakthrough discoveries described in this book.